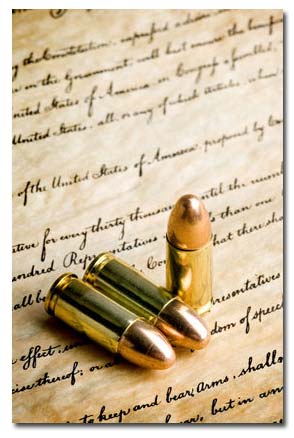 The Second Amendment to the United States Constitution, which protects a person's right to keep and bear arms in this great country, has been in place for over two hundred years, since 1787, when 39 delegates found it necessary to ensure the freedom of individuals. People in the United States, especially in Colorado, take that right very seriously. Therefore, when government action is taken against people for having guns or dictating how many bullets a person can hold in their gun, valid objections rightly arise. Your freedom is under attack.

“A well regulated militia, being necessary to the security of a free state, the right of the people to keep and bear arms, shall not be infringed.” – Second Amendment, United States Constitution

Firearms Lawyer in Arapahoe and Adams County: Protection of the People in Colorado

Don't forget: “Armed people” are called citizens; “unarmed people” are called subjects. Out of fear and in knee-jerk fashion, the Colorado legislature passed sweeping changes here at home to restrict our rights to possess guns / firearms. These laws limit the ability of law abiding citizens in Arapahoe and Adams County to transfer their firearms to others without a background check, to possess magazines of a certain size, and to force people to give up their guns and ammunition just because a criminal case is filed against them. This erosion of our basic Constitutional rights is clearly the result of lobbying from outside anti-gun influences and an overreaching federal executive branch. Don't forget, “armed people” are called citizens; “unarmed people” are called subjects. So, while the United States Constitution, 2nd Amendment, and the Colorado Constitution, Article 2 (Article II), Section 13, allow people to own a firearm, our government makes rules to take away these  firearms rights. The broad federal bias toward gun ownership can be clearly seen at 18 U.S.C of the United States Code, Section 922(g). This particular law is the foundation for the federal government's effort to restrict firearm ownership.

Restrictions on Owning a Gun

Under this law, a person is not allowed to own a gun if any of the following is true:

“You can't pick and choose which types of freedom you want to defend. You must defend all of it or be against all of it.” – Scott Howard Phillips

This list is by no means exhaustive, but covers most of the main provisions of federal law. If this is not enough, the State of Colorado has added a few items to the list. Therefore, in Colorado, if a person does any of the following, he or she may not possess a firearm:

Under both federal and state law, minute details can make the difference between a prison sentence and your freedom. Don't believe what a court or District Attorney tell you about your gun rights in Jefferson or Douglas County if you're facing a weapons charges such as Possessing a Dangerous or Illegal Weapon, Illegal Discharge of a Firearm, or Unlawfully Concealing a Weapon. Never sign any papers admitting to guilt for a crime without first consulting an experienced gun rights lawyer. We are a law firm committed to you and understanding your right to possess firearms. You need a firearm attorney to advise you whether you can legally possess a gun under both federal and Colorado law. Don't take any unnecessary risks when something so important is at stake.