The headlines blared on the news this morning: Denver Sheriff's Department Captain Accused of Assaulting Boyfriend. When a headline like this appears, people's first reaction is to think: “What a horrible person! Violence is never the answer. Assault is a terrible crime. I wonder how bad her boyfriend is hurt?” While I agree that violence is never the answer, I understand that assault isn't always what it seems. What do I mean? Let's look closer at this article for clues as to what happened yesterday in Green Valley Ranch. 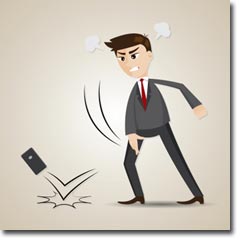 According to reports, three police cars were in front of the captain's home in Adams County. This means the altercation was violent, right? Wrong. According to one source, the police captain had thrown a cell phone at her fiancé, an Arapahoe County Sheriff's deputy. We think it is ridiculous that the police department responded with such a strong force – three police cars for someone throwing a phone? Why does the news say the woman assaulted her boyfriend? This is because Assault isn't always violent (we know, that doesn't make any sense). The least serious form of Assault is Third Degree Assault – C.R.S. 18-3-204, which states that a person will be charged if they: “Knowingly or recklessly” cause “bodily injury to another person.” This leads us to our next topic: What happens when definitions are vague.

What Exactly is “Bodily Injury”?

It seems like “bodily injury” indicates some form of injury, such as a cut or bruise. This isn't the case. In most cases in Jefferson, and Douglas County, “bodily injury” is defined as someone feeling pain. Obviously, this is extremely objective. Every person feels pain differently. Another problem is that “feeling pain” can't be proven in court. It turns into one person's word against another.

Domestic Violence Has Been Added as a Sentence-Enhancer

The news states that the woman will appear in court on “Domestic Violence charges.” But, wasn't she charged with Assault? In situations where a crime is committed between two people who are or have been in an intimate relationship, the label of Domestic Violence (DV) will be added. DV isn't a crime in and of itself, but is added to crimes as a sentence-enhancer. Because this woman allegedly threw the phone at her fiancé (an “intimate relationship”), she will face be charged with DV and face harsher consequences for her actions.

Accused of Assault? You Need a Criminal Defense Attorney Who Cares

If you have been accused of Assault or Domestic Violence in Denver, Littleton, or Lone Tree, don't hesitate to contact an experienced criminal defense lawyer. The police captain facing Assault Domestic Violence Good people make mistakes and are labeled for the rest of their life.accusations has a lot to lose – she could lose her job and her fiancé as a result of one bad decision made in a moment of anger. The woman's neighbors say she is a wonderful mother and is always there for people in the neighborhood. One neighbor said the captain is willing to help “anybody in any situation.” The police captain would be wise to work with an experienced criminal defense attorney who knows the importance of defining terms such as “bodily injury” and self defense in assault cases. Don't stand alone in court and risk your future and freedom. Have an advocate in court to defend you.

If you or a loved one has been accused of Assault or Domestic Violence, be smart, exercise your right to remain silent, and contact an experienced criminal defense attorney at the O'Malley Law Office for a free consultation at 303-830-0880 for a free consultation. Together, we can protect your future.Request a Free Consultation