Extreme Criminal Mischief: Man Bulldozed Home While Wife was Away

Sometimes, projects can be overwhelming; this is especially true when it comes to home renovation. The urge to give up is often quite strong. When this happens, the best plan of action is to stop and reevaluate, then create a plan for completing the project. A bad plan of action would be to bulldoze your home. Believe it or not, that's just what one man did when he was overwhelmed by his renovation project. Unfortunately for him, bulldozing your home without your wife's knowledge and without a permit is a crime. If this crime had taken place in Denver, Arapahoe, or El Paso County, the man would be charged with Criminal Mischief. Let's take a look at this case of extreme felony Criminal Mischief so we have a better understanding of how it is charged.

“You going to knock it down? Yeah.” 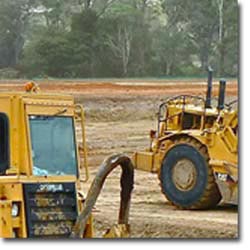 According to the news, a couple was renovating their 840-square-foot home, but they had hit a snag. Apparently, the home was in a “state of disarray,” and “couldn't be repaired.” At a particularly frustrating point in the renovation, a neighbor jokingly asked the man if they were just going to “knock down the house with a bulldozer.” When the man responded with “yeah,” the neighbor thought he was kidding. Apparently not; when the neighbor returned from work in the evening, the home was gone. The wife was unaware of the man's plan to bulldoze their dwelling – she said his actions weren't the result of an argument. It wasn't an act of revenge, but all her belongings were left in the house when it was razed to the ground. Now, the couple is homeless, and he is facing serious Domestic Violence criminal charges.

Dollar Amount = Severity of the Offense

Criminal Mischief is charged whenever the property of another person (or property owned jointly with another person) is knowingly damaged. The severity of the offense depends on the value of the item which is damaged in Adams, Douglas, or Jefferson County. For example, if a woman destroys a stereo her ex-boyfriend left in her home that is worth $489.99, she would be charged with a class 2 misdemeanor domestic violence Criminal Mischief. The severity of the crime grows along with the dollar amount. So, the man who destroyed his own home would be charged with the most serious form of felony Criminal Mischief; a class 3 felony, if the crime occurred in Colorado. This is because a lot of items were destroyed. The police add up how much everything is worth, and then charge based on this amalgamated amount. Here's a breakdown of the cost for the man who bulldozed his home:

In Colorado, anything above $20,000 is a class 3 felony. The man went well beyond this when he bulldozed his home.

Even though he destroyed his own home, the man is facing criminal charges.

Can't I Destroy My Own Belongings?

It might seem ridiculous the man is being charged with a crime for destroying his own home. After all, if he owned it, he should be able to do what he wants with it. Unfortunately, this isn't the case with the domestic violence Criminal Mischief statute. Items which are “owned jointly” are covered by the statute. Because the man owned the home with his wife and because she didn't know he was planning an extreme renovation, he is facing criminal charges.

Why You Need a Lawyer for Criminal Mischief Charges

While the example above is a case of extreme Criminal Mischief, it offers insight into how this crime is charged in Colorado. If you have received a ticket or a summons for misdemeanor or felony Criminal Mischief, don't hesitate to contact one of our knowledgeable criminal defense lawyers for a free consultation. We can give you an idea of what you are facing, and come up with a game plan to protect your future. Don't plead guilty to avoid jail time – a criminal conviction will have a negative impact on your future. Instead, fight the charges against you, and work with an attorney who will be your advocate in court.

If you or a loved one has been charged with Criminal Mischief, be smart, exercise your right to remain silent, and contact an experienced criminal defense attorney at the O'Malley Law Office for a free consultation at 303-830-0880. Together, we can protect your future.Request a Free Consultation