Most people don't realize just how many crimes they can be charged with for a single incident. For example, I read about a man from Loveland who is facing 9 different criminal charges for one night when he lost his temper. People are often charged with multiple crimes in Denver, Arapahoe, and El Paso County, so it's important to understand the implications of a conviction. Let's take a look at this incident, which occurred last week in Larimer County.

According to the news, a man had a fight with his ex-girlfriend, during which he assaulted her. Then, he took her phone away from her and locked her in her room, keeping her there for over two hours. Because of his actions, the man faced the following criminal charges. This could also result in a serious immigration issue: deportation if the man is not a U.S. citizen.

1. False Imprisonment: For locking her in her room without her consent.

2. 3rd Degree Assault: For assaulting her and causing bodily injury.

3. Obstruction of Telephone Service: For taking away her phone.

4. Domestic Violence: Sentence-enhancer added because he assaulted someone he had a previous intimate relationship with.

Apparently, attacking his ex-girlfriend wasn't enough for this man. After the assault on his ex, the man left the home. He returned later, however, and broke into the residence, attacking a woman who was a friend of his ex-girlfriend. As a result of this attack, he faces the following charges:

5. 1st Degree Burglary: For breaking into the home with the intent to commit a crime.

6. 3rd Degree Assault: For causing bodily injury to the second woman. This could also result in deporting the man from the United States.

7. Criminal Mischief: For causing damages to the house during the burglary.

8. Child Abuse: Because a child was likely present during the attack.

9. Domestic Violence: Because all this took place at the residence of a woman he had a previous intimate relationship with. 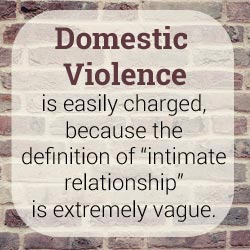 Obviously, this is an extreme example of a man who clearly has anger issues. But, we can learn one important thing from him: Criminal charges pile up from one incident. For example, I recently read about a man who was charged with multiple crimes for burning down his home after he found out his wife was cheating on him. The District Attorney added a Cruelty to Animals charge because a fish died in the fire. Multiple Domestic Violence charges are even more common in Adams, Douglas, and Jefferson County, because Domestic Violence isn't a crime in and of itself. It is a sentence enhancer which is added to any crime committed against a person with whom the defendant has had an intimate relationship. To make it even easier to charge, the definition of “intimate relationship” is extremely vague. A conviction of a Domestic Violence crime has long-term consequences, such as the requirement to complete DV treatment (overseen by the Domestic Violence Offender Management Board), and the inability to possess a weapon.

There is much at stake in Domestic Violence cases – work with an experienced lawyer to get the best possible outcome in your case.

Why You Need an Expert Attorney On Your Side

The District Attorney commonly overcharges people in order to scare them into accepting a plea agreement. If you are facing multiple Domestic Violence charges, or multiple criminal charges and you believe you have been overcharged, contact a hard-hitting criminal defense lawyer to fight aggressively on your behalf. Here at the O'Malley Law Office, we fight to win.

If you or a loved one is facing multiple Domestic Violence charges, be smart, exercise your right to remain silent, and contact an experienced criminal defense attorney at the O'Malley Law Office for a free consultation at  303-830-0880. Together, we can protect your future.Request a Free Consultation