In this week's installment of Simplified Law, we'll take a look at the complex issues surrounding Domestic Violence charges in Denver, Adams, and Jefferson County. Whenever people hear the words “domestic violence,” they shudder and imagine an abusive husband hitting his wife. This mental picture is aided by victim's rights advocates who create posters of battered women with “Stop the Violence” campaigns. While we agree that violence against any person is wrong, we don't think it is right to label all people who are facing Domestic Violence charges as violent, abusive people. Let's take a look at the law to show you what I mean.

The Lawyer's Definition of Domestic Violence

(2) “Intimate relationship” means a relationship between spouses, former spouses, past or present unmarried couples, or persons who are both the parents of the same child regardless of whether the persons have been married or have lived together at any time. It is not a stand-alone crime.”

The Simplified Definition of Domestic Violence

“Domestic violence is a sentence-enhancer which is added to any crime which occurs between two people who have been in a relationship.”

1.It is not a crime in and of itself. Instead, it is added as a label which enhances a crime and creates a longer sentence with special treatment requirements. 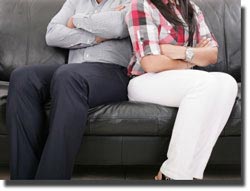 DV charges are often the result of a fight

If you are facing Domestic Violence charges in Colorado, you need to consult with an experienced criminal defense attorney immediately. This is because in all DV cases, a Restraining / Protection Order is issued which greatly restricts the restrained party's rights. They will be unable to own or possess a firearm, may be unable to get a job (because they can't pass security clearances), and their movement will be greatly restricted (because they can't cross paths with the alleged victim). Even contact with your own children can be prevented. Your freedom is at stake in a Domestic Violence case. Don't try to fight on your own. Contact an experienced criminal defense lawyer who can fight on your behalf for justice.

If you or a loved one is facing a crime with Domestic Violence charges attached, be smart, exercise your right to remain silent, and contact an experienced criminal defense attorney at the O'Malley Law Office for a free consultation at 303-830-0880 for a free consultation. Together, we can protect your future.Request a Free Consultation