In this week's installment of Simplified Law, we'll look at Harassment charges, which are common in Denver, Adams, and Douglas County, and all across Colorado. Let's take a look at the actual definition of Harassment – C.R.S. 18-9-111:

The Lawyer's Definition of Harassment

“Aperson commits harassment if, with intent to harass, annoy, or alarm another person, he or she: (a) Strikes, shoves, kicks, or otherwise touches a person or subjects him to physical contact; or (b) In a public place directs obscene language or makes an obscene gesture to or at another person; or (c) Follows a person in or about a public place; or (e) Initiates communication with a person, anonymously or otherwise, by telephone, telephone network, computer network, or computer system in a manner intended to harass or threaten bodily injury or property damage, or makes any comment, request, suggestion, or proposal by telephone, computer, computer network, or computer system that is obscene; or (f) Makes a telephone call or causes a telephone to ring repeatedly, whether or not a conversation ensues, with no purpose of legitimate conversation; or (g) Makes repeated communications at inconvenient hours that invade the privacy of another and interfere in the use and enjoyment of another's home or private residence or other private property; or (h) Repeatedly insults, taunts, challenges, or makes communications in offensively coarse language to another in a manner likely to provoke a violent or disorderly response.”

The Simplified Version of Harassment

“Aperson will be charged with Harassment if they annoy another person by touching them, following them, communicating with them over a computer or phone at inconvenient hours, or insulting and / or taunting them in a coarse manner.”

An Example of Harassment Charges 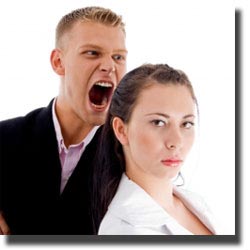 Harassment is often charged after a fight or bad breakup.

The Harassment statute is extremely broad in order to cover as many possibilities and circumstances as possible. Simply put, you will face Harassment charges if you annoy another person to the point that they call the police in Denver, Littleton, or Boulder. Let's say a woman breaks up with her boyfriend. The distraught man calls her repeatedly (and in the late hours of the night) as a way to get back at her for her breakup. The ex-boyfriend could be charged with Harassment for his actions, because they were meant to “annoy” the woman.

What is the Sentence for Harassment?

Harassment is usually a class 3 misdemeanor. If a person is convicted, they could face up to 6 months in a County Jail. Although this crime is less serious than many, people often don't take it seriously enough. They plead guilty to avoid jail time, not realizing that they will have a criminal record for the rest of their life. A criminal record can have many negative effects on a person's life, including the ability to own firearms, the ability to pass certain security clearances for jobs, and finding a place to live.

Domestic Violence is a sentence enhancer commonly added to the crime of Harassment.Domestic Violence (DV) is often added to Harassment charges. DV is a sentence-enhancer which is added whenever a crime occurs between two people who are in (or have been in) an intimate relationship. Suddenly, a class 3 misdemeanor conviction has more serious consequences, including the requirement to pay for and complete domestic violence treatment programs overseen by the Domestic Violence Offender Management Board.

Why You Need a Lawyer for Harassment Charges

If you are facing Harassment charges in Jefferson, Arapahoe, or El Paso County, you need to contact an experienced criminal defense attorney immediately. Don't ignore the charges against you or plead guilty to avoid jail. People don't realize the restrictions a criminal record will have on their life. And, when you plead guilty, you aren't able to get your record sealed. Instead of trying to avoid the charge against you, contact an experienced criminal lawyer who can discuss your case and the way to get the best possible outcome.

If you or loved one has been charged with Harassment in the Denver area, be smart, exercise your right to remain silent, and contact an experienced criminal defense attorney at the O'Malley Law Office at 303-830-0880 for a free consultation. Together, we can protect your future.Request a Free Consultation