Swatting: A New Kind of Prank with Criminal Implications in Denver

There are many different types of pranks; there's the old “water in a bucket over the door.” And, there's the college favorite of whipping cream on a sleeping friend's face. But, there is a new prank in town. It's called “Swatting,” and it happened last week in Jefferson County. Let's take a look at this prank, and why you could be charged with a crime if you pull it.

Last week in Littleton, a 911 operator received a call about an active shooter situation. The caller said they had shot multiple people, and were holed up in a building with hostages. Obviously, the police took this call seriously – it's only a few minutes from Columbine High School and many other schools. Lucky for illustration purposes, a gamer was streaming a video online in the building when the SWAT team showed up – the entire event was caught on camera.

Put simply, swatting is the act of calling in the SWAT team by reporting a serious incident by calling 911. This isn't a new phenomenon – the same thing happened in 2005 right here in Colorado. Swatting is occurring across the country. People do it for a number of reasons – in one incident, a young man lost a game of Call of Duty and called SWAT in for revenge. What needs to be understood, however, is that the prankster who called 911 will face serious charges if caught. Let's look closer at the charges they would face.

Arrested for False Reporting or swatting?

False Reporting – C.R.S. 18-8-111, is a crime in Douglas, Adams, and Arapahoe County. A person will be charged if they knowingly: 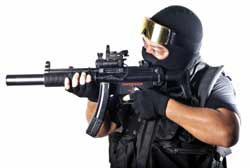 “Make a report or knowingly cause the transmission of a report to law enforcement authorities of a crime or other incident within their official concern when he knows that it did not occur.”

In other words, don't make up crimes and call the police. It's a waste of time and resources, and the police don't take kindly to it. This crime is a class 3 misdemeanor, which results in up to 6 months in a county jail and restitution – which could be several thousand dollars. If committed during the commission of another criminal offense, False Reporting can be a class 2 misdemeanor.

Arrested for Swatting? You Need an Attorney

If you have been arrested for swatting and charged with False Reporting, you need to contact a leading criminal defense attorney. The recent swatting case has illustrated just how serious the police take instances of False Reporting. They have publicly stated they will prosecute the prankster to the full extent of the law if he or she can be found. High-profile cases tend to be serious – which is why you need a skilled attorney by your side in the courtroom.

Image courtesy of vudhikrai at FreeDigitalPhotos.net