Sign Language Could Result in Criminal Charges in Denver Area

Who knew that sign language could be so dangerous? I recently read an article that surprised me; last week, a deaf man was arrested after he signed a dirty word to police officers during a confrontation. In this situation, the man obviously meant to sign the derogatory word, but could sign language be misunderstood? Could a deaf person be charged with Disorderly Conduct or another crime for signing something that looked like a derogatory word? What I found was intriguing: multiple people have gotten into trouble for using sign language. The same thing could happen in Denver, Adams, and Jefferson County.

In a few situations, misunderstanding sign language led to trouble with other people and police officers.

Two hearing-impaired men were stabbed at a club after communicating in sign language. Someone mistook their hand motions for gang signs.

Reportedly, a man was stabbed repeatedly after a passerby on a street mistook his sign language for signaling gang affiliation.

A deaf woman called 911, and when officers arrived, they mistook her signals as an attempted attack. They used a stun gun and incapacitated her.

Police assaulted and stunned a deaf man whose only misdeed was that he was trying to communicate with them using sign language.

In the examples above, the hearing-impaired people were victims of misunderstandings, unlike the man who was arrested for signing a derogatory word. In that story, the police responded to a call of a man being disorderly at a fast-food restaurant. When officers approached him, he signed the word “pig.” Unfortunately for him, one of the officers was fluent in sign language. If this had happened in Arapahoe, El Paso, or Douglas County, what kinds of charges could a person face? The most obvious answer would be Disorderly Conduct – C.R.S. 18-9-106.

What you consider to be a normal reaction to someone else's behavior could result in Disorderly Conduct charges. 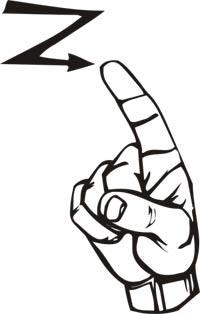 What is Disorderly Conduct in Colorado?

Disorderly Conduct is charged whenever a person knowingly, recklessly, or intentionally makes a coarse and offense gesture, utterance, or display in a public place with the intent to incite an immediate breach of peace. It is also charged in other situations, but for the purposes of this blog, we'll focus on the first part of the statute (for a full description and simple definition of Disorderly Conduct, read our Simplified Law blog post). If a deaf person signs an offensive word or symbol with the intent to cause a breach of peace, they could reasonably be charged with Disorderly Conduct, because the statute covers gestures and displays.

Why You Need a Lawyer for Disorderly Conduct Charges

It's not difficult to be misunderstood. What you consider to be a normal response or reaction could result in criminal charges being filed. And, in some cases, constitutional rights are completely violated, as in the cases of the hearing-impaired people who were attacked by the police. Disorderly Conduct is commonly charged, but that doesn't mean you should just plead guilty to avoid jail time. Doing so could result in a permanent conviction on your record. Instead, contact the best criminal defense lawyer in the Denver area who will help you fight the charges you face. Protect your future by working with an attorney from the O'Malley Law Office who fights to win.

If you or a loved one has been charged with Disorderly Conduct, be smart, exercise your right to remain silent, and contact an experienced criminal defense attorney at the O'Malley Law Office for a free consultation at303-830-0880. Together, we can protect your future.Request a Free Consultation